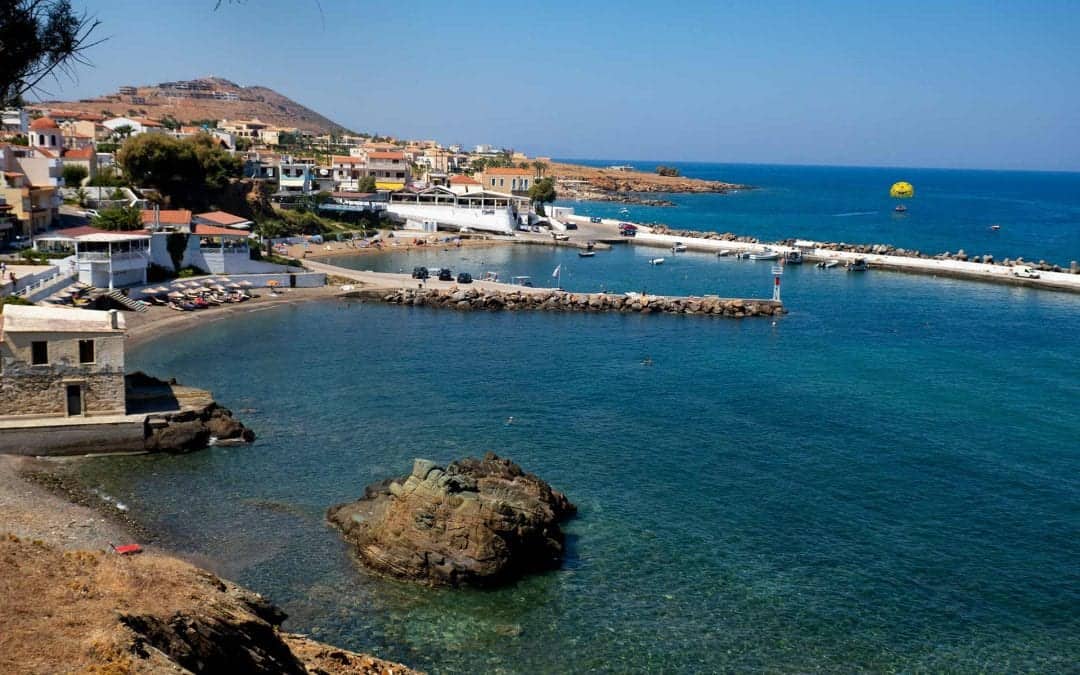 You may be contemplating booking Crete holidays. Perhaps you’re looking for one of the quieter Crete resorts, somewhere to unwind, relax and take things slowly for a while. You probably want to take advantage of the sunny Crete weather and spend some time chilling out on some beautiful Crete beaches. You may want somewhere from which you can venture out and explore more of Crete island, inland and along the coast. Step forward Panormos, Crete.

Panormos – also known as Panormo – is a small fishing village on the north coast of Crete that is now largely given over to tourism.  Does it sound like a base for your holidays in Crete? Read on for everything you need to know about Panormos.

Where is Panormos Crete?

Panormos is on the north coast of Crete, conveniently next to the main highway that runs across the north of the island. It’s 59 km (37 miles) north-west of the capital of Crete, Heraklion.  The closest major town is the provincial capital, Rethymno, which lies 20 km (12 miles) along the coast to the west.  Crete’s second city, stunning Chania, is 82 km (50 miles) away.

We’ve referred to the village as Panormos Crete to avoid confusion with two other destinations in Greece which have the same name. The Panormos in Crete is not to be confused with Panormos, Mykonos or Panormos, Skopelos. Tell that to your sat nav system. At the time of writing Google Maps refers to it as ‘Panormos in Rethymno’. You may also see it called Panormos Rethymno.

How To Get To Panormos in Crete?

If you’re travelling from Heraklion, the regular buses west to Rethymno and Chania stop at Panormos on request.

If you’re travelling from Rethymno (occasionally referred to as Rethymnon in guidebooks), the number 20 runs every 30 minutes during the season from May to October. After leaving Rethymno bus station, it continues parallel to the coast, passing resort villages Adelianos Kampos and Skaleta en route.

Panormos is a n atmospheric, fairly quiet fishing village that with some pleasant beaches. It reminded me a little of Paleochora on the south coast of Crete, in that it’s somewhere you would come to slow down for a while.  Like Paleochora, it’s close to some outstanding beaches and other Crete attractions very much worth seeking out.

I visited in early September, and the beaches in Panormos were moderately busy. There are several cafes around the beaches, all serving a range of Greek and Cretan cuisine. They also have great sea views, an ideal spot to stop by for a while.

In comparison with other resorts on the north Crete coast, Panormos struck me as more relaxed and laid-back. Tourism has obviously taken over, but the place isn’t anything like as busy as larger villages such as nearby Bali Crete and, beyond Rethymno, Georgioupolis.

It’s got all the things you need – beaches, flower-decked tavernas, a supermarket and pharmacy – right on the doorstep.

The main Panormos Crete hotels are actually outside the village, to the west. The Royal Blue Resort, Iberostar Creta Marine and Iberostar Creta Panorama are all 5-star establishments, and among the best Crete hotels and resorts. They have luxury accommodation and private beaches sheltered by artificial breakwaters. It’s only a few minutes’ walk from the Creta Panorama down to Geropotamos beach.

What To Do in Panormos Crete?

The main things to do in Panormos Crete revolve around the Panormos beaches and eating out. There are three beaches in Panormos village, with others further along the coast.

Boat trips from Panormos Crete run from the breakwater in the small port. These are a great introduction to diving and snorkelling in Crete, with some amazingly clear water along this section of coast. You can also go jetskiing, waterskiing or parasailing from the harbour.

During the summer, the Panormos tourist train also runs regular excursions to the nearby village of Margarites and gorgeous Melidoni Cave.

The best beaches near Panormos Crete are just to the west. You see Geropotamos Beach from the main road – a sublime arc of golden sand with a river on one side and a striking sea arch the other.

A minute or two further along the road, Spilies Beach, also known as Mariou to Riaki beach, is better concealed. It’s a small pebble beach with honey-coloured cliffs either side, and a great taverna serving food and drinks. We rate both these beaches among the best beaches in Crete – don’t miss them.

It’s also around a 20-minute drive to Arkadi Monastery, one of the most significant places to visit in Crete. In 1866 hundreds of Cretans died after being besieged by occupying Ottoman Turkish forces.

Rethymno is a lovely coastal city with a huge sandy beach and fine medieval old town and Venetian fortress. The bus connection is excellent, so it’s very easy to reach.

What about other places to visit in Crete?

Crete tours run from Panormos, covering a selection of the best places in Crete, including Chania old town, Balos Beach and Gramvousa, Preveli, Falassarna, Elafonissi and more. These are usually run by Rethymno-based agencies who pick up from hotels in Panormos.

There is also Crete’s capital, Heraklion, which deserves a day or two of your time. One of the most popular ancient Crete tours is to Knossos, the Minoan palace complex just to the south of Heraklion.