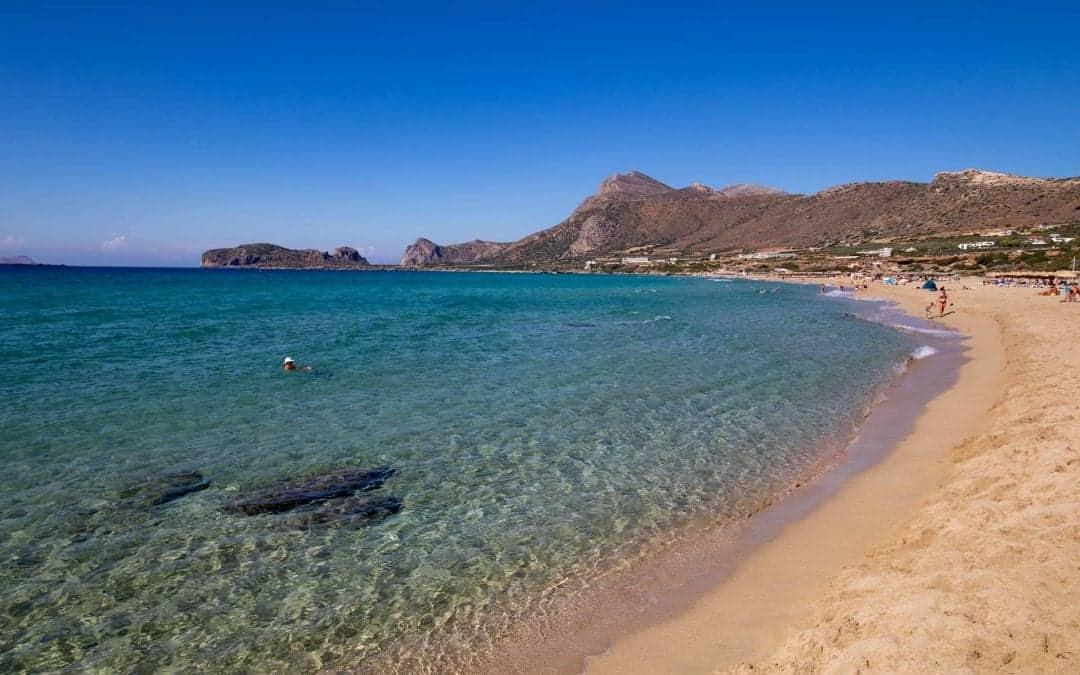 Falassarna Beach is staggeringly beautiful, without a doubt one of the best beaches in Crete. There are actually five beaches rather than one, all very different in character. It’s in a quiet corner of north-west Crete, a blissful spot that feels like it’s on the edge of the world. Falassarna is somewhere that got under our skin more than any of the other top Crete beaches. We weren’t quite expecting it, but we both felt it is one of the most beautiful places in the world that we’ve visited.

What makes Falassarna so special? Its stunning setting is unforgettable, with high mountains at either end. Then there are the different beaches. The spectacular main beach attracts the most visitors, with its incredible clear water (like that at nearby Balos beach). There are also two lovely calm natural pools shielded by rocks, and beautiful sandy coves with dunes and rocks either side.

Falassarna (also sometimes spelt Falasarna or Phalasarna) is a slightly wild version of paradise. Often the only sound we could hear was the wind, or the waves of the Mediterranean Sea lapping the sandy shore. If you’re planning a visit to Crete Falassarna Beach should be right near the top of your things to do in Crete list. Many only visit on a day trip as part of their Crete holidays, but we also found it to be one of the best places to stay in Crete, especially if you want to explore off the beaten path Crete.

FALASSARNA BEACH IN A NUTSHELL

Falassarna is a series of magnificent beaches on the stunning north-west coast of Crete, with mountains at either end

The main beach is a gorgeous 1 km stretch of golden sand, with plenty of facilities and activities

Some of the smaller beaches at the northern end have an almost end-of-the-earth, wilderness feel

There are also two natural sheltered pools protected by rocks, ideal for kids

Balos and Elafonissi attract more crowds, but whisper it, Falassarna is even better

It faces due west so is a great spot for sunsets

WHERE IS FALASSARNA CRETE?

Falassarna is on the north-west coast of Crete island.  It’s in the province of Chania, 52 km west of the city of Chania. The closest town of any size is Kissamos (also known locally as Kastelli), 14 km away.

GETTING TO FALASSARNA CRETE

The easiest way to get to Falassarna is by car. You can reach it from Chania in around 90 minutes, from Rethymno in 2.5 hours and from Crete capital Heraklion in 4 hours.

The Chania Falassarna bus is a good option during the peak summer season. Six services a day operate during that period, taking 1 hour 40 minutes from Chania bus station. This continues along the coast road, calling at all the main Chania beaches (including Agia Marina, Kolymvari and Kissamos.

The bus runs four times a day in the shoulder seasons (May-June and September-October). If you’re visiting around mid-October, the schedule may arbitrarily be stopped for the season, even if the KTEL Crete buses website tells you otherwise. It pays to ask as many people as possible to make sure they’re still running.

Falassarna is open for business between May and the end of October. After this most businesses close for the winter.

It would be stunning in May and June, when you would still have spring flowers around. However, the sea wouldn’t be warm enough to swim in at this time.

It is hot – mid 30s Centigrade – in July and August, the peak season. This is by far the busiest time of year. All the restaurant and bar owners we spoke to said that it’s crowded, and accommodation is expensive but gets booked out nonetheless. The Falassarna restaurants and tavernas are usually packed out in the evenings. Things start to quieten down in September, but it’s still hot, often into the 30s.

We visited in the October shoulder season.  The temperature varied between 23-28 Centigrade, dropping to around 19 or 20 overnight. The crowds had long gone. The cafes and bars were generally quiet.  The weather was fantastic, and we would often be sharing a whole section of beach with just one other family or couple. And Falassarna hotel prices were around half the summer peak rates.

As mentioned, Falassarna can be hot for much of the season. It does also get its share of winds, especially from the north, which can take the edge off the summer heat.

Falassarna is tiny. Most of it is spread out along the main road from Kissamos. There are two shops, one ATM, various hotels, holiday apartments and tavernas. It’s more of a strung-out hamlet than a village.

Occasionally has patches of pink sand

At northern end of main beach

A series of rocky outcrops, tiny coves and beachside woodland

Facilities 300 metres away back at main Falassarna beach

Reached by walk through rocks, dunes and trees

Steep drop off shore of almost a metre

Galasia Thea taverna a short walk up the hill

Locals advised it’s rocky underfoot, so not good for swimming without water shoes

Named after the tiny church on the hill above

Sunbeds and umbrellas next to kids’ pool and further along

Falassarna was a powerful port city state, originally founded by the Dorians during the 7th century BC. Its enclosed harbour was developed with fortifications and by the 4th century BC Falassarna was an important regional naval power.

Its heyday lasted until the 1st century BC, when the Romans ransacked and destroyed it. An earthquake later destroyed and buried what remained of the city and its harbour.

Excavations only started in the 1960s, and much of the site is yet to be uncovered. Some foundations of the city’s ancient buildings are visible – you can see them from outside the site fence. The site is meant to be open 10 am to 4 pm every day except Monday during the tourist season – it wasn’t on the Thursday I visited!

It’s a short (1 km) drive from the village and bus terminus through olive groves. It’s around 200 metres from there to the beginning of the Falassarna to Balos hike (9 km / 6 miles).

The other local trip is the Falassarna cruise to Balos beach. It’s 35 euros per adult, and runs, weather permitting, from the small port between June and mid October. The boat sometimes stops at Gramvousa Island as well.

We stayed at the largest Falassarna hotel complex, Falasarna Bay. This is a complex of studios and larger apartments, all with jaw-dropping beach and sea views. The Falasarna Beach Hotel shares the same building, and has a similar set-up. They also have the marvellous Taverna Falassarna in-house.