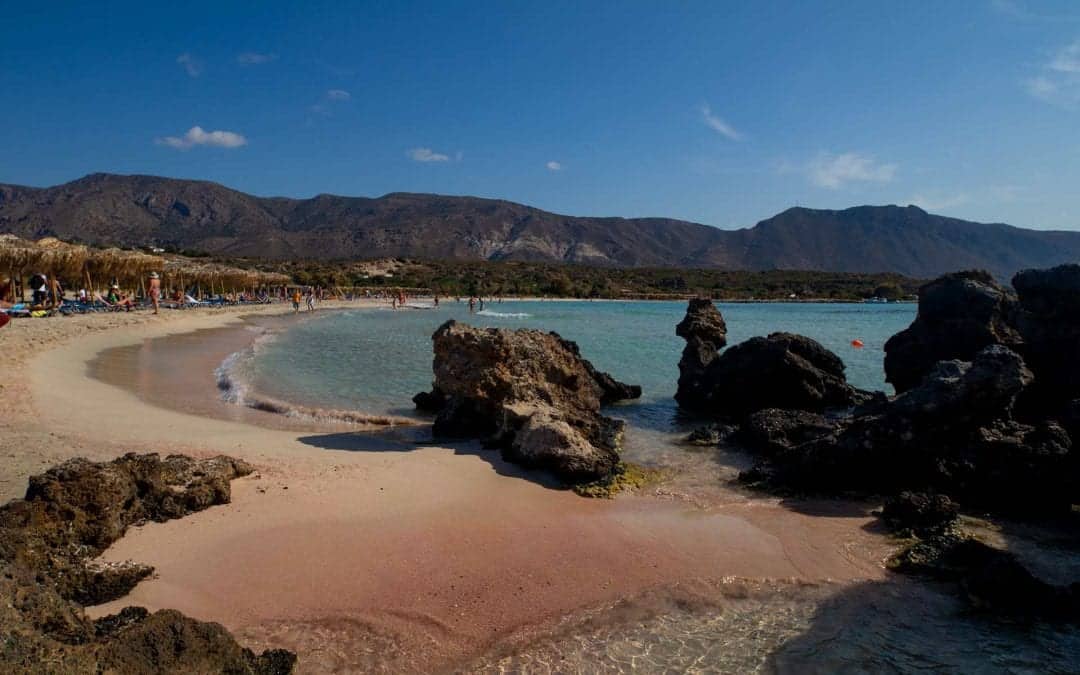 Elafonissi beach is one of the best of all Crete beaches. It’s the famous pink sand beach Crete island has tucked away in its south west corner, a once-remote idyll now a major stop on the Crete travel trail.

Elafonissi is one of the most popular Crete destinations, along with Balos, Gramvousa and Falassarna beaches which are also on the west coast. Most visitors come for the day, especially on Elafonissi tours from the busy resorts around Chania and Rethymno.

In our guide to Elafonissi beach, we tell you everything you need to know to make the most of your visit to one of the best beaches in Crete.

ELAFONISSI BEACH IN A NUTSHELL

Elafonissi is a series of beaches, most of which have a fringe of pink sand on the shoreline

The main Elafonissi beach is a large triangle of sand, with the sea to the south and the shallow Elafonissi lagoon to the north

Elafonissi island is just beyond the lagoon, and has several more glorious pink sand beaches, with a chapel at the far end

You can visit Elafonissi between May and the end of October – you can get there over the winter, but only if you drive there yourself

Overcrowded in the peak summer months, the best time to visit early or late in the season

It’s a 30-45 minute walk from the stunning secluded beach at Kedrodasos, a series of bays and sand dunes with a grove of juniper trees.

WHERE IS ELAFONISSI BEACH IN CRETE?

Elafonissi Crete is in the south-west corner of Crete island. It’s part of Chania province, the westernmost of the four Crete provinces. It’s one of the best Chania beaches, and is an hour and a half to two hours’ drive from Chania.

The closest town of any size is Paleochora, 20 km to the east. Paleochora is a great base for holidays in Crete, as it’s within relatively easy reach of Elafonissi and is also on the stunning Agia Roumeli ferry route.

HOW TO GET TO ELAFONISSI BEACH CRETE

During the spring and summer several buses a day run from Chania to Elafonissi. The Chania to Elafonissi bus runs through the resorts to the west of the city, then through Kolymvari and Kissamos before heading south. The buses drop you off at the top of the hill above the car park, less than ten minutes to the beach.

Otherwise you can drive from Chania or Paleochora, and other places in between. The road down from Kissamos has some difficult winding stretches, but there are far worse roads in the mountain areas of Crete.

You can also reach Elafonissi beach Greece by boat. The Paleochora Elafonisi boat runs during the summer months, usually into October. If you’re around later than that you can do what we did and take a speedboat ride to Elafonissi. They usually need a minimum of four customers to run the trip, which gives you three to four hours at the beach.

You can rely on warm, sunny Elafonissi weather most days between May and October. There will obviously be the occasional inclement day. It’s also worth keeping an eye out for the wind forecast – the Greek Meteo site is usually pretty reliable with its local forecasts. Elafonissi can be exposed to some strong winds, so if you can plan around a good forecast, it’s worth your while.

When you visit Crete Elafonissi beach amazes not just with its pink sand but also its pristine, beautiful clear water. If you come all that way, you’d want to swim in it, surely?

The water in the Mediterranean is warm enough to swim in from July through until late October. Sometimes it might be warm enough in mid-to-late June, but year to year you can’t guarantee this.

In July and August Elafonissi is jammed with people. Our boat driver said you could expect 3,000 to 4,000 visitors every day. It’s still pretty busy through most of September, with the Crete weather still close to 30 Centigrade most days.

We went during October, when it’s still very warm, and the sea is warm enough to swim in. There were probably 500 or 600 people on the beach and the island, so there was plenty of space to wander, and no feeling of overcrowding. October is a great time to visit Crete, just be aware that some transport services and tours wind down around the middle of the month – and in some cases they stop altogether.

It’s one of the most beautiful beaches in Crete, and has all the facilities you’d need – just not enough of some of them.

There are plenty of umbrellas and sunbeds available for rental. There are also some snack bars and cafes, selling drinks and food. Many will be relieved to know there are toilets on Elafonissi beach. There are just six cubicles, so the line for these in the height of summer could be very long.

There is also a shop selling inflatable swans, flamingoes and other beach toys and gear.

OTHER CRETE GREECE BEACHES NEARBY

Elafonissi is on the E4 trail that traverses some of the stunning south Crete coast. By serndipitous good fortune, it just so happens that one of the best beaches in Chania province, Kedrodasos beach, is only a half-hour, 2 km walk away. The E4 trail continues past several other beaches after Kedrodasos, eventually reaching Krios beach two hours, 7 km (4 miles) away.

We had a great day out at Elafonissi, with a fantastic boat trip there and back.

There’s no question that it’s one of the most essential things to do in Crete. The fringe of pink sand on the beaches is very striking and incredibly photogenic. It is a small slice of paradise, and if you can get there at a time it’s not overrun, it’s still a very special place.

We have to say that the best beach in Crete that we have visited in Falassarna, which has a wonderful wild and romantic feel to it. But Elafonissi is still very special, one of the top beaches in Crete without a doubt. Many would go further and say that it’s one of the best beaches in Greece, and they’re not far wrong.