The Lagos Portugal beaches, especially those around the Ponta da Piedade headland, are among the most beautiful beaches in Europe. Some are absolutely magical, surrounded by a landscape of rock arches, stacks & fairy chimneys. In our guide we show you how to visit 8 of the very best beaches in Lagos.

Lagos is one of the main Algarve resorts, towards the western end of the Portugal south coast. Many Algarve beaches are characterised by spectacular rock formations, and the best Lagos, Portugal Beaches are the last of these before the Portugal coastline changes dramatically.

The Lagos beaches that we describe are sheltered from the worst of the Atlantic winds and waves. It’s impossible to overstate how amazing these Lagos Algarve beaches are. They’re among the best beaches in Algarve, indeed the best beaches in Portugal.

One of them was even voted the best beach in the world. They are reason enough to include the Algarve on any Portugal itinerary.

So which of Lagos’ best beaches was once voted the best in the world? OK, it was Praia Dona Ana, on the east side of Ponta da Piedade.

Dona Ana beach (you’ll also see it referred to as Praia de Dona Ana and Praia da Dona Ana) is also on the east side of Ponta da Piedade. It has a sizeable car park and a café above the beach.

Readers of Conde Nast Traveller once voted this beach one of the most beautiful beaches on the planet. I’ve visited incredible beaches all over the globe, and it’s certainly in the elite category, along with a few in Western Australia, Thailand, New South Wales, Greece and the UK.

It’s certainly one of the most beautiful beaches in Europe.

What makes Praia Dona Ana beach so special? Pristine golden sand, clear turquoise water and honey-coloured rock formations that could have been plucked from a fairytale.

Or possibly Cappadocia in Turkey. It’s also sheltered from the prevailing westerlies, making it calm to swim in.

It can get very crowded in the summer season, so it’s well worth arriving early in the day, or just visiting in the shoulder season (April-May or October).

It’s one of the best places on the Algarve coast, and not exactly a secret. So plan ahead to miss the crowds.

Top Tip: In summer season you can catch a boat from Lagos directly.

One of the smaller Lagos Algarve beaches, Praia do Pinhao is a small cove a few minutes’ walk north from Praia Dona Ana, on one of the routes back towards Lagos town.

It’s accessible via a steep set of steps, and more secluded than most of the other beaches near Lagos Portugal – despite being only a few minutes’ walk from the Old Town.

A magical little place, one of the best places in Algarve to escape the crowds, especially outside the summer season.

I once met a group of friends from Australia who had travelled to Portugal just to see Praia do Camilo beach. Even if you’re only passing through Lagos Camilo beach is an absolute must see, along with Dona Ana beach. It’s one of our favourite Algarve Portugal beaches, and is off the same minor road that leads down to the Ponta da Piedade lighthouse.

The O Camilo restaurant at the top has great ocean views, but you can’t see the beach from there. I remember when this place was a shack – now it’s sleek steel and glass.

The topography of the land around Camilo beach Lagos has changed a lot since I first visited in 2002, with some land having collapsed into the Atlantic due to erosion. The one thing that hasn’t changed is it’s one of the best places to visit in Algarve.

Once you’ve made it onto the beach, you’re surrounded by a fantasy world of honeycombed sea arches, rock stacks and pinnacles. It’s the kind of place where you can’t find enough superlatives.

Oh, and before I forget, there’s another beach right next to it, which you can reach by following the base of the cliff around to the left.   One of the most beautiful beaches in Portugal, and I’m not even sure it has a name.

How to get there:

Top tip: It’s 225 steps down to the sand, on a winding wooden staircase.

This tiny beach on the east side of Ponta da Piedade is surrounded by spectacular sea stacks and backed by a vertical cliff. The only way to access it is by boat – which you can either charter from the boat stand a few hundred metres down the coast near the end of Ponta da Piedade. A wonderful spot if you want to get away from it all for a while.

As well as having some of the top beaches in Portugal, it has one of the most enjoyable coast walks, along the clifftops of the Ponta da Piedade.

The road from Lagos town leads to the Ponta da Piedade lighthouse, a prominent landmark at the top of the cliffs.

It’s not just the Lagos beaches you need to see – the Ponta da Piedade is also home to one of the most beautiful stretches of Portugal coastline.

This sublime scenery is, for me, what makes Lagos one of the best beach resorts in Portugal.

A staircase leads down from close to here to a cove at sea level, where you can go on one of the best Algarve boat trips, exploring the coves and caves of the Ponta.

It’s one of the best places to go in Algarve, somewhere we’ve returned time after time, always noticing something new each time.

There are at least two hidden beaches that are only accessible by boat on the eastern side of the Ponta. It’s also possible to hire a kayak and visit these yourself.

It says a lot about Lagos as one of the top Portugal beach destinations that you can stay somewhere for a week, stay two miles (3 km) from one of the top beaches in Algarve, yet only pay it a brief, cursory visit one evening.

This can only be explained by the surfeit of riches at Dona Ana and Camilo.

Porto de Mos is a great Algarve beach, only 3 km from Lagos. Yet it seems a world away – it’s a lot quieter, the long sweep of sand easily absorbing the visitors that pass by.

It’s a great beach to explore, with rockpools and dramatic stratified cliffs.

Porto de Mos marks the beginning of a transition in the Algarve coastline.

The ‘beach of light’ is high on many people’s list of where to go in Algarve.

Along with Lagos, it’s one of the best areas to stay in Algarve, with many of the region’s best beaches a short drive away.

Top Tip : Best way to see this unspoilt beach & the amazing rock formations of Western Algarve is to take a popular boat trip like this from Lagos.

Along with Praia do Peneco in Albufeira, this is one of the best town beaches among the Algarve Portugal resorts.

Praia da Batata is the busiest of the beaches in Lagos, mainly because it’s the nearest to the Old Town. It’s right next to the estuary breakwater and the Forte da Bandeira, the fortress guarding access to the town.

Surprisingly, this is the furthest many visitors to Lagos venture. We befriended one lady who went to Batata beach every day, and only made it to Praia Dona Ana on the last afternoon of her stay.

She didn’t know about Praia do Camilo. Not for long!

The vast Meia Praia Lagos beach is across the river from Lagos town. It’s massive, one of the biggest beaches in this part of the Algarve.

To reach it you can cross the bridge on foot and settle down somewhere at the town (west) end of the beach.

Alternatively, you can catch a train from Lagos station, alighting at the first stop, Meia Praia. The further east you go, the more exposed the beach is to westerly winds.

And this means you’ll find more windsurfers along this part of Meia Praia beach.

David Angel is a British writer and photographer who has been travelling and photographing Europe for over 25 years.  His work is regularly featured in worldwide media including the BBC, the Guardian, the Times and the Sunday Times.

Welcome to Delve into Europe

I'm David, a Welsh photographer & writer for over 20 years who currently lives in Prague with my young family.  Along with my wife Faye we created Delve into Europe to showcase Europe's under the radar, unique & beautiful places.   You can find out more about us here 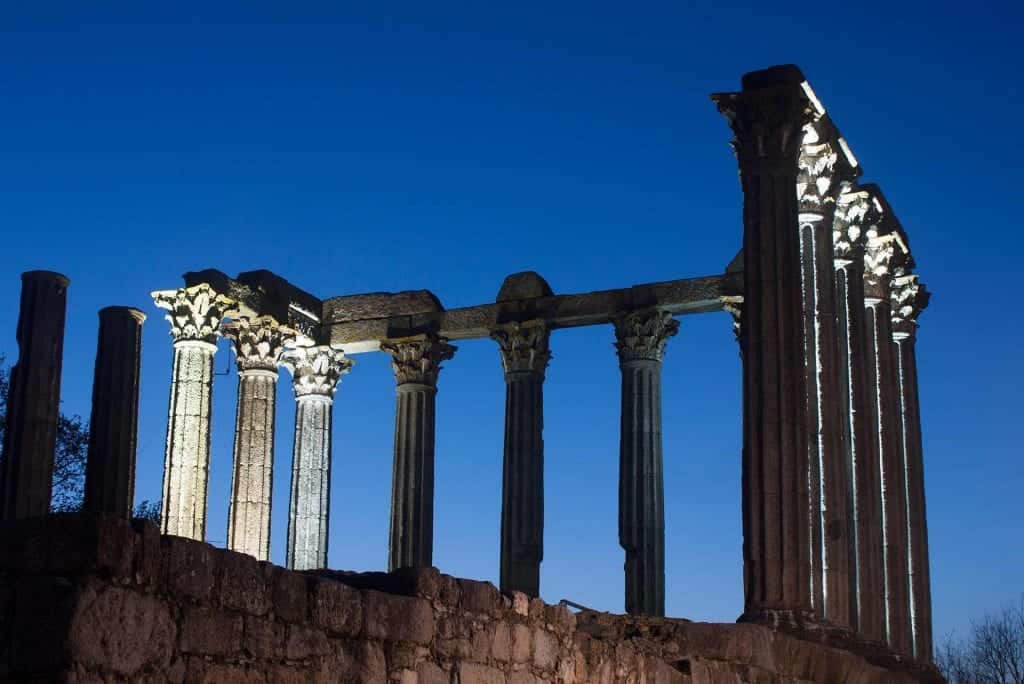 10 BEST places to see & Things To Do in Evora, Portugal 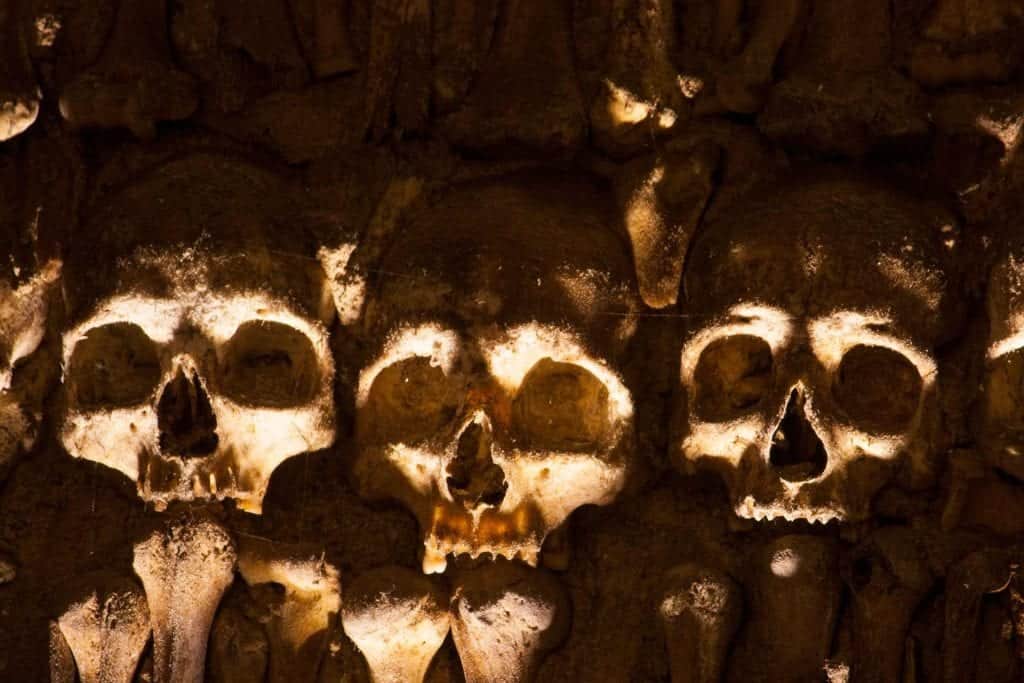 Visiting the Chapel of Bones, Evora (the Capela dos Ossos in Portugal) 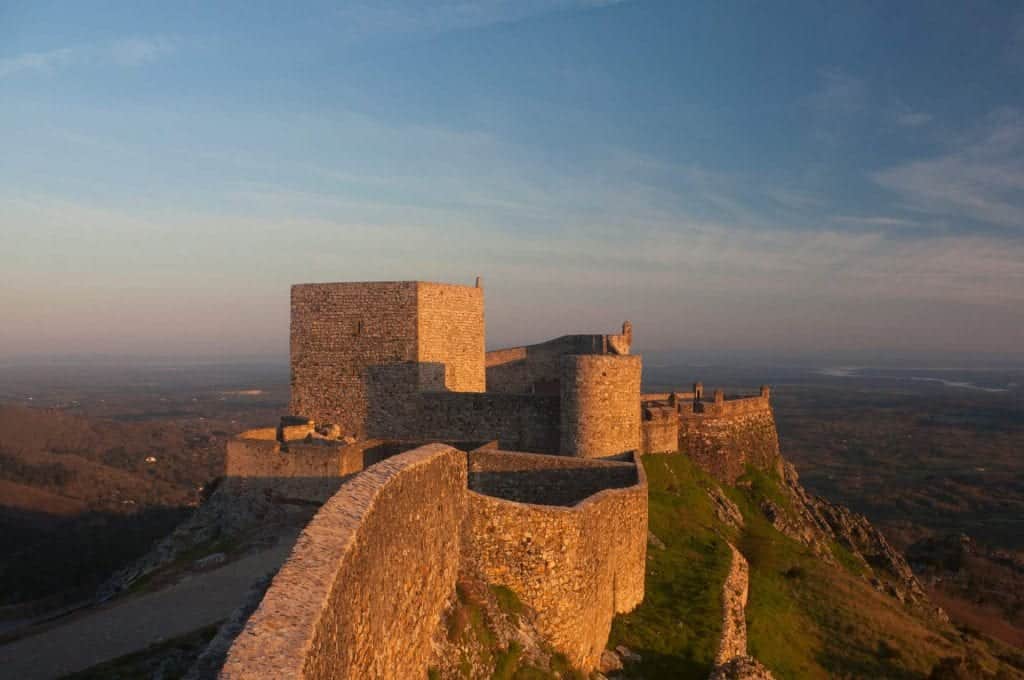 A Guide to the charming village of Marvao, Portugal (photos & how to visit) 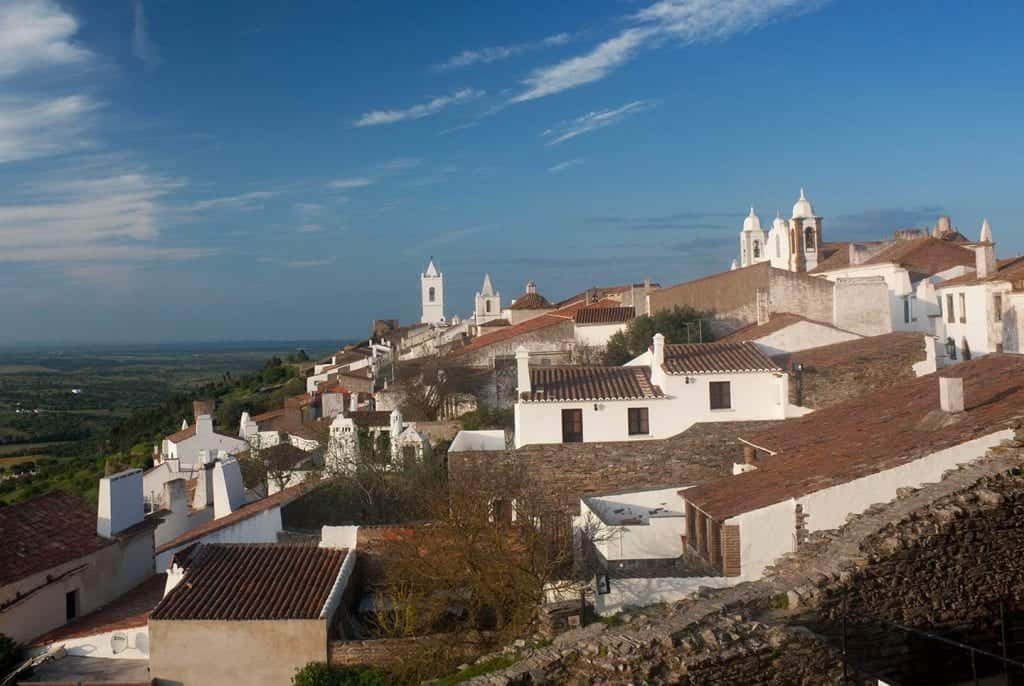 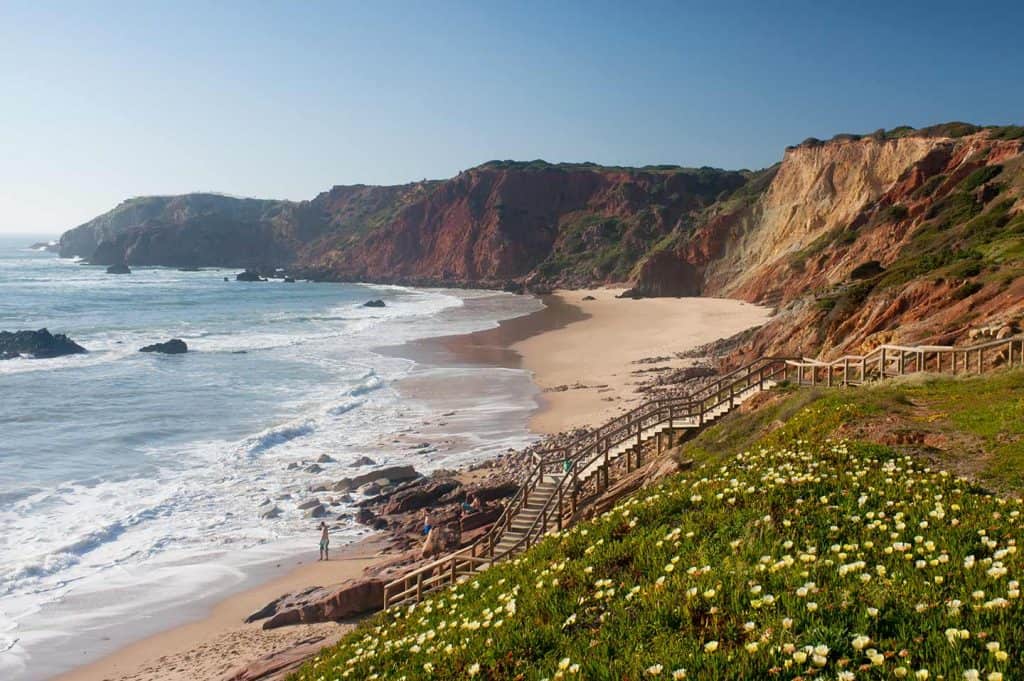 Costa Vicentina, Portugal – things to do, travel guide & tips for your visit 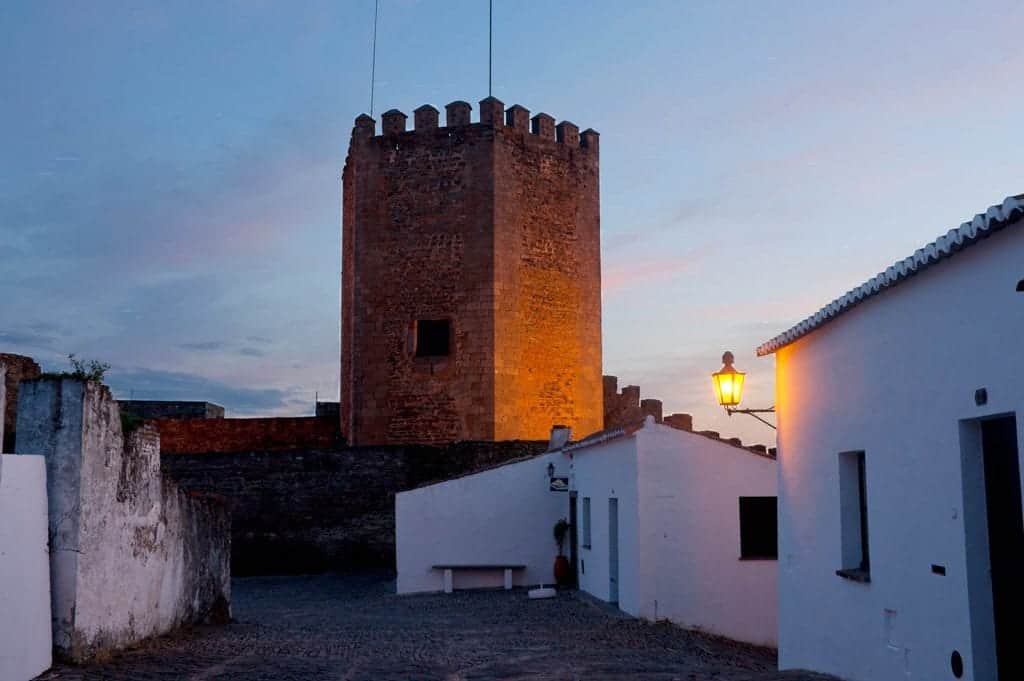 Abbesses Metro – The Most Beautiful Metro Station In Paris 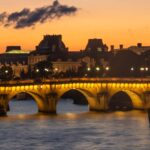 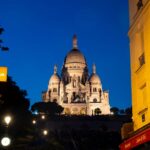 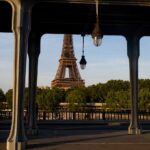 Bir Hakeim Bridge – One Of The Most Beautiful In Paris