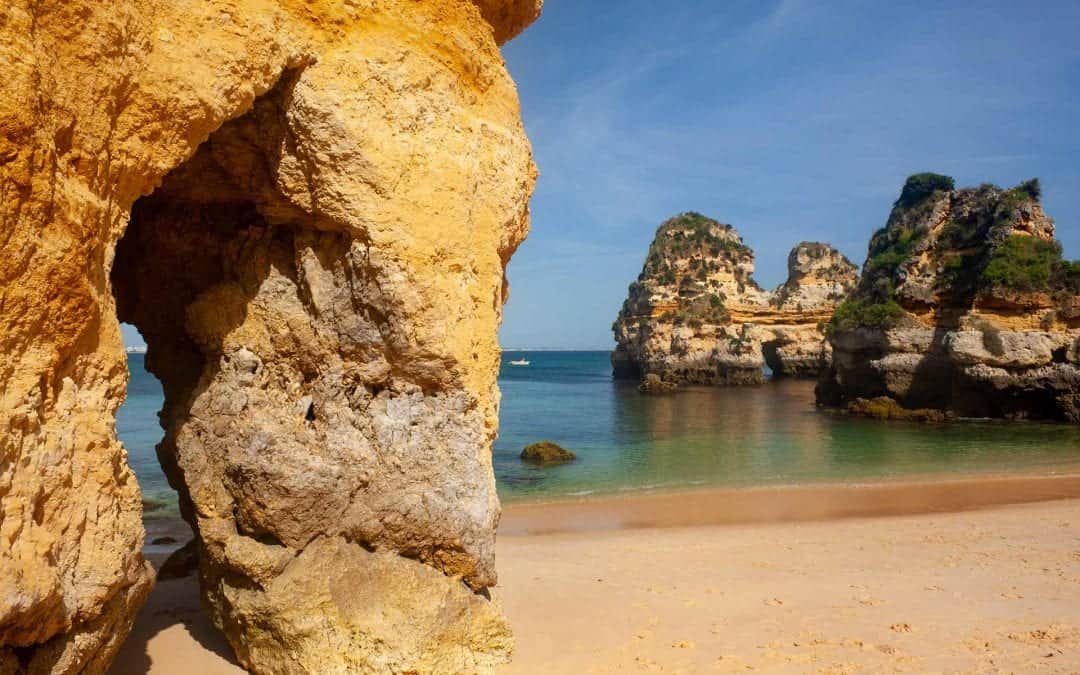 The Algarve region has many of the best beaches in Portugal. Algarve occupies the Portugal south coast and its south-western corner, a stunning section of Atlantic coastline. There are so many Algarve beaches to discover, but winkling out the best Algarve beaches can take A LOT of time and legwork.

Algarve best beaches vary greatly, from the gorgeous coves with fantastic rock formations in the centre to the wild surf beaches of the Costa Vicentina in the far west. Don’t overlook the eastern Algarve either – you’ll find some of the best beaches in Algarve in the long, flat sand bars around Faro and Tavira.

This run-down of over 20 of the best beaches Algarve is a great way to help you plan your Algarve holidays.  You can decide on where to stay in Algarve, based on the type of beaches you prefer. Add in other things to do in Algarve and how much – if any – Algarve nightlife you wish to sample, and you’re well on your way.

For now, enjoy this tour of the very best Algarve Portugal beaches.

BEST BEACHES IN THE ALGARVE – IN A NUTSHELL

The wide, flat sand beaches of the east of the Algarve are also beautiful, with enticing towns like Tavira to explore

In no particular order:

What a place. This Alvor beach is a little off the beaten path in Algarve terms.  It’s a fantastic Atlantic beach with a fantasy riot of rock stacks, sculptures, caves and even a double sea arch. One of the best places to visit in Algarve.

Sagres is the gateway to the Costa Vicentina, the wild west of Portugal. The beach to the east of the Fortaleza (Fortress) in Sagres is calm and sheltered. Tonel beach, with its eroded ochre cliffs, bears the brunt of a pummelling from the Atlantic Ocean, in exhilarating surround sound. Popular with surfers, and never crowded.

OK, the Cape St Vincent lighthouse is not a beach. Cabo de Sao Vicente is the south-westernmost point in Europe, a highly dramatic place that was long believed to be the end of the world.  It’s a compelling place to watch the sunset, with waves crashing against the cliffs below. It’s also home to the south-westernmost bratwurst stand in Europe.

Praia Dona Ana is one of the most beautiful beaches in Europe, and has even been voted the best in the world. Few places come close. It’s a glorious sandy beach, set in a fairytale landscape of rock stacks, honeycombed rock formations and ochre cliffs. It’s one of the best Lagos beaches, a short distance from the old town and beach.

One of the best things to do in Lagos is visiting this exquisite beach 1 km along the coast from Praia Dona Ana. It’s a 225-step descent from the road to this Lagos beach, and you’re straight into a fantasy land of incredible natural rock sculptures.  There’s even a hidden ‘twin’ beach accessible through a rock arch or around a cliff base. One of the best places in Algarve, with a health-boosting climb back up to finish.

The Point of Piety is the headland on which the two aforementioned best beaches in Lagos are situated. This staggering landscape is one of the most beautiful in Europe, reason enough to make Lagos part of any Portugal itinerary. The best way to see it is by boat, whether kayaking yourself or being taken on a short trip. Here you’ll find amazing rock arches, grottoes and concealed, otherwise inaccessible beaches. It’s the main reason we think Lagos is the best place to stay in Algarve.

This is a fine long beach just to the west of Ponta da Piedade. It’s backed by a spectacular sloping cliff, so there’s always space, even in summer. It’s one of the better Algarve destinations, in a convenient location 4 km (2.5 miles) from Lagos old town.

The ‘Beach of Light’ is one of the best beaches near Lagos Portugal. It’s one of the most popular Algarve resorts, with another long, fine beach not dissimilar in appearance to Porto de Mos. It’s a lot quieter than Lagos town and one of the best resorts in Algarve for families because of it.

Monte Clerigo is a vast open beach on the west-facing part of the Costa Vicentina.  The beach is narrow and backed by cliffs at the northern end, while its southern part is an enormous expanse of sand beneath the small village of the same name. Off the beaten path Algarve at its best.

Possibly my personal favourite Algarve beach, the surfing beach of Praia do Amado has everything. There are miles of pristine sand, the sound of wild waves lashing the coastline, cliffs of several hues, and outstanding coastal walks I could repeat daily for months at a time. The area around the nearest village, Carrapateira, is remote by Algarve standards. It’s worth venturing this far west though, as it’s one of the best places to visit in Algarve.

Amoreira beach is another treasure to be uncovered in the Algarve’s wild west. It’s a short drive out of the small town of Aljezur, a broad, pristine swathe of sand with a river on one side and a restaurant at each end. Throw in whole hectares of sand to yourself. The west coast Algarve has several of these stunners. It’s one of the bet places to go in Algarve to get away from it all.

Cordoama beach is another Costa Vicentina gem on the west coast. It’s on the most rugged part of the Algarve coast, in the teeth of the prevailing Atlantic westerly winds. As with the likes of Tonel and Amado, it’s one of the prime surf beaches Algarve has, with conditions mostly too rough (and water too cold) for swimming. It’s great for beach and coastal walking though – at low tide you can walk along to neighbouring Praia do Castelejo.

Vale de Centeanes beach (sometimes spelt Vale de Centianes) is one of several great beaches near Carvoeiro. It’s typical of those on the central Algarve, with the striking honeycombed cliffs and crystal-clear water ideal for swimming.

The Beach of the Three Brothers gets its name from the three unusual rock formations at one end of this sublime beach.  It’s undoubtedly one of the most beautiful beaches in Algarve, with fine soft sand, striking outcrops of rock, arches and a small network of caves to explore. Superb cliff-top walks too.

Praia da Rocha (Beach of the Rock) is the main beach of the Portimao conurbation to the east of Lagos.  Praia da Rocha is one of the very first Portugal holiday resorts, having first been discovered in the 19th century.  I wouldn’t say it’s among the best Algarve resorts, but Praia da Rocha beach is superb, an immense stretch of sand with a smattering of characteristic Algarve rock formations.

Peneco is the main Albufeira beach, just below the Old Town.  It’s one of the main reasons Albufeira went from sleepy fishing village to boisterous party capital of the Algarve.  It’s an impeccable beach,Salgados Lagoon, tucked away behind the dunes.  one of the best town beaches in Algarve. A few hundred yards along from the Peneco (rock pinnacle) at one end, traditional old fishing boats can be seen hauled up onto the sand. Albufeira is not to everyone’s liking, but this and some of its other beaches are outstanding.

Praia da Gale is a massive long beach to the west of Albufeira, stretching most of the way to the village of Armacao da Pera.  The coastline here is flat, so access is easy with no cliffs or stairs.  There’s as much sand as you could ever hope for and plenty of rocky outcrops for inquisitive explorers. It’s one of the best beaches near Albufeira, albeit with a much quieter feel than the party town.

Salgados beach is the western end of Praia da Gale, almost reaching Armacao da Pera. What sets this section of beach apart is the lagoon behind the dunes, where migrating birds stop and nest. P

Albufeira nightlife is not to everyone’s taste, but for the sheer number and variety of its beaches,  Albufeira is one of the best resorts in Portugal. The coastline west of Albufeira is studded with around ten small beaches and coves. Praia Sao Rafael is one of the best beaches in Albufeira,  and it has it all – rock formations, soft sand, perfect clear water. There are also caves close by, and you can explore these and the other local beaches on boat trips from the beach. You can also walk between them using a mixture of clifftop paths and roads.

Another of the Albufeira best beaches is Praia do Castelo (Castle Beach). It’s to the west of Praia Sao Rafael, another enchanting cove with cliffs and outcrops of rock sculpted by Nature into all kinds of amazing shapes. It’s a fantastic beach for kids, full of hundreds of thousands of sea shells. The setting is glorious, the water crystal-clear. There’s also a great café where you can sit and watch the waves go by.

If you visit Praia do Castelo, then make time to drop by at Praia do Evaristo as well. A cliff path links the two beaches, which are similar in some ways. Evaristo is considerably smaller than Castelo, and consequently gets crowded more quickly. It has some great rock pools, so if the kids are with you they’ll have lots of fun there.

Praia da Falesia is a long, vast sweep of sand to the east of Albufeira, stretching to Vilamoura. It’s a steep climb down to the beach, from which you get a close-up view of the spectacular red, white and ochre-streaked cliffs. If you ever visit Algarve anywhere near Albufeira, make a beeline for this tremendous beach.

Visit the quirky Chapel of Bones in Evora
Things to do in Lagos Portugal
Costa Vicentina, Algarve, Portugal