Llanddwyn Island – One of the Most Beautiful Places in Wales 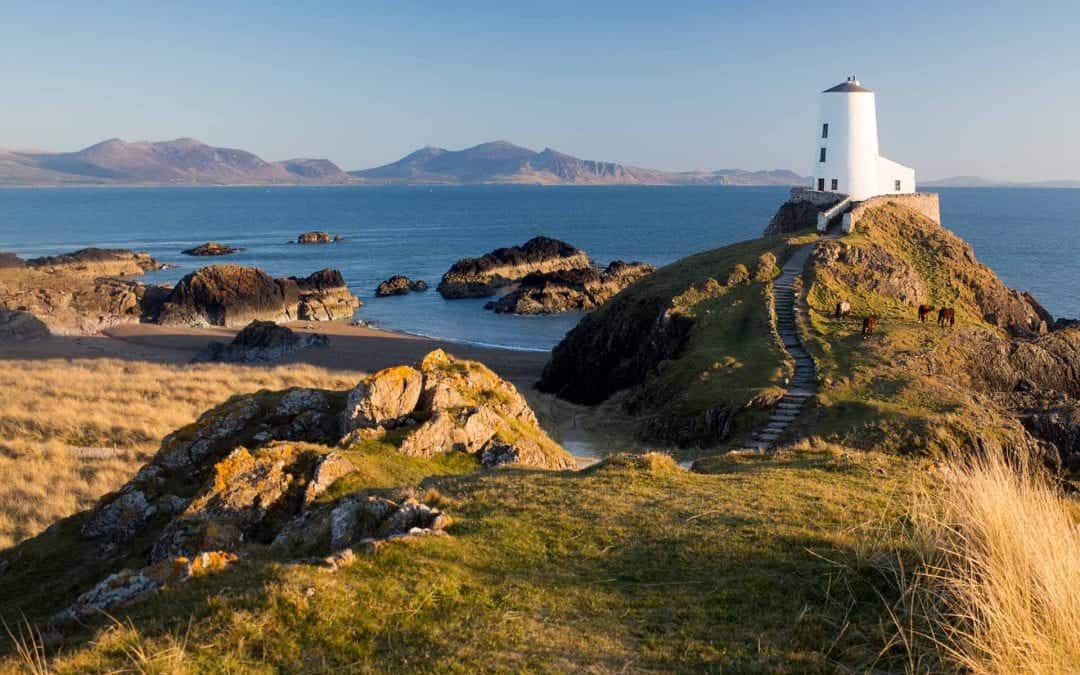 Llanddwyn Island is one of the most special of all Welsh islands.

We’d even go so far as to say it’s one of the most beautiful islands in Europe.

It requires a bit of a trek, but our Llanddwyn guide tells you everything you need to know.

We rate this one of the best days out in Wales, and indeed the UK.

Llanddwyn is one of the best hidden gems of Britain, and it’s easily visited as a day trip from most places in North Wales. You could also reach it from Chester, Liverpool or Manchester if you’re happy to drive two hours each way.

WHERE IS LLANDDWYN ISLAND?

Llanddwyn Island is a remote tidal island off the coast of the isle of Anglesey, in North Wales, UK.

‘OK, but where is Anglesey?’, you may ask. It’s in north west Wales, in the west of the United Kingdom. It’s a short distance from mainland Wales and the mountains of the Snowdonia National Park.

Llanddwyn is on the south-west coast of Caernarfon Bay, with magnificent views to Snowdonia and the jagged mountains of the Llŷn Peninsula, which has some pretty amazing coastline itself.

GETTING TO LLANDDWYN ISLAND

Llanddwyn Island from the air

The easiest way to get to Llanddwyn Island is by car. Unless you’re staying elsewhere on Anglesey, you’ll need to drive a short distance on the A55 North Wales Expressway. This goes across the Britannia Bridge, one of two bridges currently linking Anglesey to mainland Wales. It’s within reach of many other North Wales destinations, including Conwy and Betws-y-Coed.

You need to turn off at junction 8A, just after you arrive on the island. You then take the A5 towards the village of Llanfair PG, and turn off left onto the A4080. This road runs around the south-west corner of Anglesey. It passes through Newborough (Niwbwrch), the nearest village to Llanddwyn. Follow the brown ‘Traeth Beach’ sign in the centre of the village.

The road then continues into Newborough Forest. Eventually you reach a coin-operated toll machine – the charge at the time of writing is £5 per vehicle. The car park is about a mile (1.6 km) further on. This is a very short walk from Newborough beach. Llanddwyn Island is off to your right.

You can also reach Newborough by bus, but after that you need to walk or ride a bike the three miles (5 km) to the beach. The #42 bus runs from Bangor (around 45 minutes), via the town of Menai Bridge (30 minutes). Seven or eight buses run daily Monday to Saturday.

One of the beaches and lighthouses on Llanddwyn

The only way from the car park to the island is on foot. You can either go through Newborough Warren, on one of several forest walks, or along the beach. I always do the latter.

You can access the island – remember that word – most of the time. However, it can be cut off for up to two hours at high tide. It’s always worth checking on Llanddwyn Island tide times before setting out.

It’s also worth remembering that Llanddwyn is a very exposed location. There’s no protection from the full force of storms coming in from the sea. So if there’s a bad weather forecast, it’s better not to go out there.  The tide tables tend to go by the wayside in the teeth of a south-westerly gale, so the island would be cut off for considerably longer than the normal two hours.

Saint Dwynwen, or Santes Dwynwen, is the Welsh patron saint of lovers and sick animals.

The Santes Dwynwen story has several different versions. The common thread in all of them is that she was a Welsh princess, the daughter of the 5th century king Brychan Brycheiniog. She fell in love with a nobleman, Maelon Dyfodrull. However, Brychan had arranged for to be married to someone else.

Their love was destined to be thwarted. Maelon was angry with her for not disobeying her father, and as he threatened violence, she turned him into ice.

Dwynwen was visited by an angel soon afterwards, and was granted three wishes. The first was for Maelon to be thawed out, but to stay away from her. The second was that she would never marry – she became a nun, just to make sure. Her third wish was that she could help other lovers, especially those in pain like herself.

She eventually found her way to Llanddwyn, where she lived a life of retreat. She built a church on the site – there are still remains of a later church on the island. The name ‘Llanddwyn’ means ‘Church of Dwynwen’.

Over the last twenty years or so, her feast day has been celebrated increasingly widely. It’s on January 25th.

Gorgeous Newborough Beach, with Snowdonia mountains in the distance

Newborough Beach is one of the best beaches in Wales. It’s a vast, long swathe of sand, stretching from the south-west corner of Anglesey, Abermenai Point, to Llanddwyn Island and beyond.

The stroll along the beach is one of the best walks in Wales. The views across the bay to the mountains of the Llŷn Peninsula are breathtaking, and as you approach the island, they get even better.

It’s a fair walk from the car park – a brisk 25-minute march from the viewing platform to the Island. Count on around another 15 minutes to traverse the length of the island.

I’ve always thought Newborough is the best of the Anglesey beaches. My first visit was when I was 14. We played beach cricket for an hour or so, and everyone else stopped because they were tired. I burned off my energy walking over to the Island, and what I saw made a very deep impression.  The dunes behind Newborough beach are also a wonderful place to wander and explore.

The stone cross overlooking the lighthouse and tip of Llanddwyn Island, Anglesey, Wales

The walk across Llanddwyn Island is short but exhilarating.  You pass a Celtic cross next to the pathway, then the remains of the stone church, which is probably medieval. The path continues across the island, with glimpses of the sea either side. Eventually you reach one of the beaches and the first Llanddwyn Island lighthouse, with the mountains of the mainland behind. This is one of my favourite Welsh beaches, an astonishingly beautiful place. Some of the wild ponies may saunter along and join you for the view. 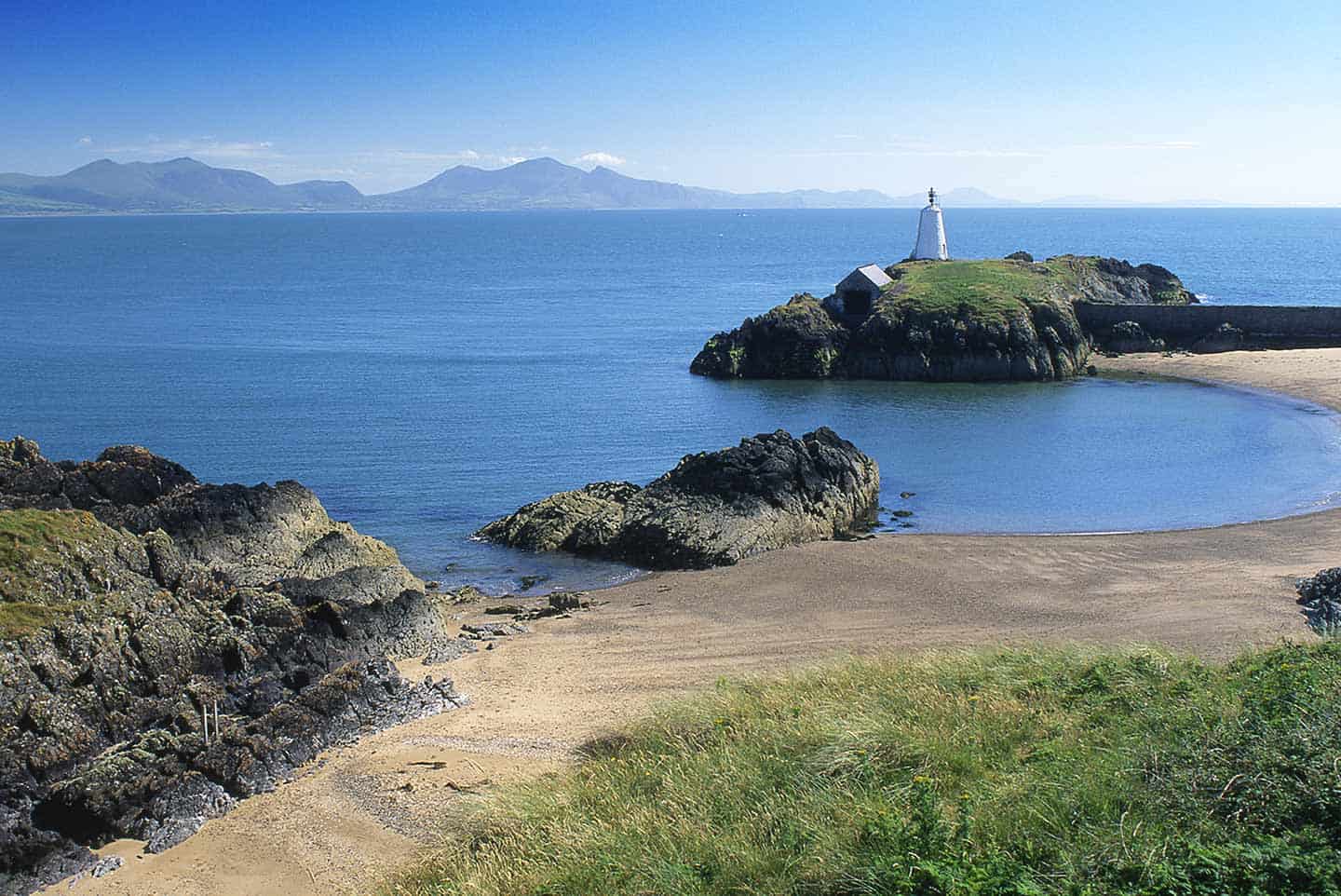 Llanddwyn is one of the most beautiful places in the UK

As you follow the shoreline, you soon reach another pristine beach and another white Llanddwyn lighthouse, perched on top of a small hill. The stone cross at the top of the dunes behind is a wonderful vantage point from which to survey the scene.

The pilots’ cottages on Llanddwyn

The row of cottages near the first beach was home to a team of pilots responsible for helping shipping navigate the nearby Menai Strait. This stretch of water separates Anglesey from the rest of Wales, but is treacherous to shipping with sandbars and shifting sands.

PLACES TO STAY IN ANGLESEY

The Menai Strait, looking from Anglesey to mainland Snowdonia

Some of the best Anglesey hotels are along the Menai Strait, between 30 and 40 minutes’ driving time from Llanddwyn and Newborough. We’ve always found the area between Menai Bridge and Beaumaris has the best accommodation on Anglesey, and this is where we recommend.

Chateau Rhianfa is a 19th century fantasy castle between Menai Bridge and Beaumaris with its own private beach. It looks like one of the modernista masterpieces of Barcelona, transplanted to North Wales. It is simply stunning, and so are the views across to Snowdonia. The rooms are five-star luxury and there’s a fine dining restaurant, Le Dragon Rouge.

Ye Olde Bull’s Head is another of the best hotels in Anglesey, with one of the best restaurants in North Wales downstairs. It’s in Beaumaris, home to the fine Castle that’s part of a UNESCO World Heritage Site along with those in Conwy, Caernarfon and Harlech.

I’ve also stayed in the Bulkeley Hotel Beaumaris on several occasions. It’s across Castle Street from Ye Olde Bull’s Head and is housed in a magnificent Grade I 19th century building. Both are a very short walk from Beaumaris Castle. It’s a fine atmospheric 3-star hotel – if you want to stay somewhere historic this is a great choice.

There are also a few places to stay in Menai Bridge. On our recent North Wales tour we stayed at the Anglesey Arms in the centre of the village. It’s good mid-range accommodation with excellent bar meals. It’s within a two-minute walk of the Menai Suspension Bridge, and next door to the Waitrose supermarket where the Duchess of Cambridge used to shop for groceries.

Things to do in Barmouth, Wales
The Ultimate Wales Bucket List
Your Ultimate Guide to the Llŷn Peninsula Beaches